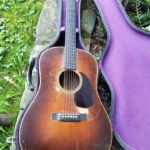 1933 Martin twelve fret D-28 shade top- the ONLY one EVER made. Slotted head stock. Twenty one twelve fret D-28s were ever made and this absolutely one of one that was a shade top. This is a well known instrument as it belonged to the great Grammy award winning Norman Blake for quite some time. Norman sold it- we have a signed receipt dated 1987- to a player and it has been with the same owner since that time. This remarkable guitar is truly uncirculated and off the market for more than three decades. Early in it’s life it was with Salty Holmes and the Prairie Ramblers band. They backed Gene Autry. The guitar was featured with Salty Holmes on the cover of a 1930s songbook- which we have a copy of. It was also played by Country Music Hall of Fame member Patsy Montana- the first female country artist with a platinum selling single. Recently it was pictured on the album cover and played on IBMA two guitarist of the year Kenny Smith’s effort, “Return”. This guitar is also housed in the original case. It stands alone as the true Holy Grail of the acoustic guitar world. When an instrument is literally the only example ever produced- rare is hardly the word for it! Provenance, investment, sound, historical importance, etc. This guitar has it ALL. You’ll never see one again- guaranteed. The ultimate acoustic guitar. Serious inquiries only please.